Book #3 in the Lunar Chronicles' cover had been revealed~ Yeah. I'm late. 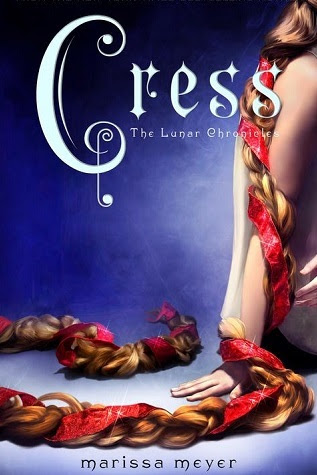 First Thoughts: It's so beautiful! But then, all of the Lunar Chronicles' covers are amazing. Just by looking at it, you can tell Cress is about Rapunzel. Can't wait to read it! :D

I really love Marissa Meyer's writing style and her plots in the Lunar Chronicles. I love how Cinder and Scarlet's story doesn't end in their book, but continues on throughout the series. And in Cress, we'll learn about another new protagonist. Her name is Cress, of course! =)

Goodreads Summary:
Rapunzel's tower is a satellite. She can't let down her hair - or her guard.
In this third book in the bestselling Lunar Chronicles series, Cinder and Captain Thorne are fugitives on the run, with Scarlet and Wolf in tow. Together, they’re plotting to overthrow Queen Levana and her army. Their best hope lies with Cress, who has been trapped on a satellite since childhood with only her netscreens as company. All that screen time has made Cress an excellent hacker – unfortunately, she’s just received orders from Levana to track down Cinder and her handsome accomplice. When a daring rescue goes awry, the group is separated. Cress finally has her freedom, but it comes at a high price. Meanwhile, Queen Levana will let nothing stop her marriage to Emperor Kai. Cress, Scarlet, and Cinder may not have signed up to save the world, but they may be the only ones who can.

Winter:
The last book in the Lunar Chronicles will come out in 2015! ;) It's called Winter. Snow White. Stay tuned for more news about Winter~ but now, it's all about Cress.

So I found an interview of Marissa Meyer. And there was one Q&A that I must share with you guys. :)

Q: Will we get to meet anybody new in this book who will also play a role in Winter?
A: In addition to Cress, there's a new character named Jacin. He had a really, really tiny role in the first book, but I don't expect anybody to really remember him. He actually takes on a much bigger role than I anticipated. Really, by the end of Book 3, you will have met all of the main characters, including Winter. She has a small part in Book 3, but the chapter she's in might be my favorite chapter of the book because she's a very interesting character and a lot of fun to write.
Okay. So if he's a guy, I"m seeing romance coming. Omg. Is he the guy for Cress? *wiggles eyebrows. And there's still Captain Thorne. Hmmm. Oh and I don't remember a Darin from book one. Gotta go back and reread. Omg.

And more great news! ;D Cinder will probably become a movie! Woot! Nothing is confirmed yet though. There's definitely no cast. Marissa leaked that they're looking for a director, so.....

And this question from USA Today confirms it a little bit more. Just teeny bit.

When you finally signed the deal, did you start dream-casting in your head?

Okey. That's it for now, unless I get a copyrighted ticket or something from the USA Today website. :D