Welcome to my stop on the Solstice High Blog Tour
hosted by Virtual Author Book Tours. 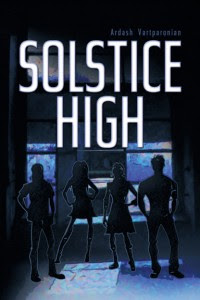 Matt, Rochelle, Daphne and Jonas are four students starting their senior year of high school, but suffer a freak-accident the very first day and start to realize that they are developing superhuman abilities. They quickly realize that the school principal, Mr. Devlin, has in fact more than just education on his agenda, and is using the school for his own purposes.
Not only must the four friends try to figure out what Devlin’s plans are, but when he will strike, and seeing as how they cannot turn to grown-ups for help without exposing themselves, must themselves grow-up in order to stop him. As well as learning to cope with these developing powers, the four teenagers must deal with the day-to-day muddles of being a teenager, such as volatile emotions, infatuations and family issues.
Cindy's Review:
At First Glance:
Well....I really thought this book would be a fun, hilarious read. Just judging from the teaser and all. It was funny at times, but this turns out to be more of an adventure. And I was also surprised to find some romance in it. Otherwise, it was the kind of book I expected it to be. A fun, high school read about powers. Haha.

The Characters:
Matt - Matt? Hmmm. Well, the first thing I learned about him was that he's gay. It's not meant to be insulting. But I mean, it's a pretty big ish? part of the story. The power he got was changing into an animal. Any, I believe.  Like a bat. Tiger. Etc. Once he does, he gets the animal's strength and other things. Overall, he"s a pretty cool guy.

Rochelle - Rochelle is the queen bee of the school. Surprisingly, she hangs out with her group. Even if Matt is gay and all. And Daphne isn't the most popular girl. She does use quite a lot of cuss words but that's a modern trend right? Haha. At least in school it's modern. Especially when you're the queen bee. Rochelle's power is telekinesis. Which means she can make things move using only her mind. She can even fly and make herself float.

Daphne - Daphne is the other girl of the group. She's my favorite character for some. Maybe it's her romance interest with Hunter. ;D Rochelle calls her the redhead girl. I feel like she's closer with Matt than the other two in the group. Daphne's power is the use of fire, light, etc. Something like that. She can burn people. Hunter's the opposite. He's ice. That just makes it more romantic. ;D

Jonas - Jonas is like the school jock. If you know what I mean. If I'm not getting this from another book I recently read, I believe Jonas is the captain of the lacrosse team. But I maybe wrong. I think he's the swimming captain though. Jonas has the power to heal. So he can heal cuts, bleeding, etc. I think he can even bring back the dead. And one huge thing. He has a crush on Rochelle. Rochelle, of course, doesn't know at all.

Mr. Devlin - The evil mastermind of the whole thing with superpowers and such. He sends his minions to kill the four of them.....and well. He's doesn't really act mean and all at school, but he is evil.

At the end of this book, there are many deaths. Don't worry, none of them are fist-wrenching, heart-stabbing deaths, so for those who doesn't like to cry, you probably won't cry.

Final Thoughts:
I think this was a nice adventure read. And I truly enjoyed the unexpected romance that appeared in there between Daphne and Hunter. <3 I want to say, kids can read it, since it's just so entertaining, but they can't.

This book filled in a lot of things you expect from a book. Like you can say it's mature, because it does have some mature stuff in it, but it's not serious at all, like in a new adult book. Ugh. I can't even describe anything, because I'll confuse myself.

Either way, you should give this one a try if you enjoy adventure, romantic YA books. ;)

Ardash Vartparonian was born in London but raised in Buenos Aires, Argentina. At the age of 18 he began his debut novel, Solstice High, and continued writing throughout his last year of school and first year of university, where he moved back to the UK to study English Literature at Edinburgh University. Now a fourth year student, Ardash enjoys going out with his friends, watching horror movies and reading fantasy book while trying to keep up with his university work. Find out more at http://sbpra.com/ardashvartparonian/