Goodreads Summary: Madison LeBon is dead set against the dead.
Her fresh start at Oxford University is a brand new beginning. She finally has a chance to turn the page on her psychic powers and cumbersome voodoo heritage. Snakes, dolls, ghosts, and spirits: Farewell…Not quite.When the tragic lovers in a painting—the subject of her first history class—begin to haunt her, she must accept her gift before life imitates art. The lovers warn her against their own nemesis, a Puritan from the English Civil War. Unfortunately, said nemesis is now going all homicidal on Madison. College becomes more complicated when she falls hard for Rupert Vance, a troubled aristocrat and descendant of one of the characters in the painting. With the spirit of a murderer after her, Madison realizes that her own first love may also be doomed…

Cindy's Review: First, I want to thank Marion Croslydon very, very much for providing this book for me to read, because guess what? I love this book! I love all the history facts and how this whole creative, love story was created from just a painting!! ;) <333

The Characters/Plot:
So basically, there are 2 main characters, but 3 more important characters in this book. The teaser on the back talked about all 5 of them, but it was so confusing, I just went like 'huh?' until I started reading the book.

Madison LeBon - Madison is from the present-day United States. She goes to Oxford University in England and there she meets the future Earl of Huxbury, Rupert Vance. Madison's family has a voodoo pass where the female line gets visions and ends up going crazy. Visions are starting up for Madison.

Rupert Vance - Rupert Vance, as you know, is the future Earl of Huxbury. His dad, who is now the current lord, controls Rupert alot. Rupert's mother died when Rupert was a young age. Rupert's father, being all rich and stuff, got himself another wife, and Rupert listens to every wish his father wishes him to do. That is, until Rupert's father was forcing Rupert to leave Madison, who isn't his class-level. 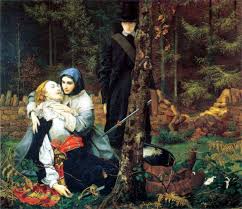 Robert - The cavalier in the painting was called Robert. Robert is also Rupert's ancestor. Sarah and Robert fell in love, but they had to hide their romance, for Sarah's mother would not allow Sarah to marry such man. Sarah ended up dying at a really young age, betrayed by her sister, Anne. Robert died one month after her.

Peter - Peter was Sarah's jealous husband. She was almost forced to marry Peter, even if her heart didn't belong to him. Peter is now in present-day England, hunting Madison and trying to kill her.

The Extras:
This astonishing love story made me wanna cry. And I was reading it during school during first period which was IWE at the office. I had some free time and then I had tears in my eyes. It was embarrassing LOL. But no one saw me.

One cool thing about this story is that the author made up a whole story just from the picture drawn by William Shakespeare Burton above. That's amazing! That's like telling a story from just a picture!! It's true that a picture tells a 1000 words but a 1000 words can paint a more magnificent and detailed picture.

Well guys, if you love historical fiction/romance thing. You gotta read this book!!