Welcome to my stop on the Persistence of Vision Tour
hosted by the author herself, Liesel K Hill!
Click HERE to view the rest of the tour schedule.
Today, I will be doing a review and an interview with one of the characters, Clay. 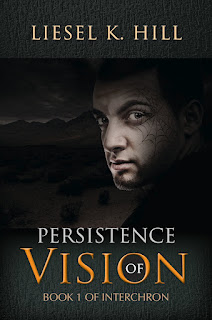 In a world where collective hives are enslaving the population and individuals have been hunted to the verge of extinction, Maggie Harper, and independent 21st Century woman, must find the strength to preserve the freedom of the future, but without the aid of her memories.
After experiencing a traumatic time loss, Maggie is plagued by a barrage of images she can't explain. When she's attacked by a creep with a spider's web tattoo, she is saved by Marcus, a man she's never met, but somehow remembers. He tells her that both he and her creepy attacker are from a future in which individuals are being murdered by collectives, and Marcus is part of the rebellion. The collectives have acquired time travel and they plan to enslave the human race throughout all of history. The flashes Maggie has been seeing are echoes of lost memories, and the information buried deep within them is instrumental in defeating the collective hives.
In order to preserve the individuality of mankind, Maggie must try to re-discover stolen memories, re-kindle friendships she has no recollection of, and wade through her feelings for the mysterious Marcus, all while dodging the tattooed assassins the collectives keep sending her way.
If Maggie can't fill the holes in her memory and find the answers to stop the collectives, the world both in her time and in all ages past and future will be doomed to enslavement in the grey, mediocre collectives. As the danger swirls around her and the collectives close in, Maggie realizes she must make a choice: stand out or fade away...
*New Adult futuristic dystopian fantasy

Cindy's Review:  First off, I would like to thank Ms. Liesel K. Hill for asking me to review this book and sending me a copy. Totally did not regret saying yes to her offer. :) Since, I feel so thankful, I'll be doing this review in my normal reviewing posts way. ;)

The Cover:
I think the cover is scary. LOL. When my English teacher saw it, she was like 'ooohhhhh'. I'll tell you why she saw it later... i like how I know who the guy is when I just began to read the book. So, good job explaining there. ;)

The Characters/Plot:
Maggie Harper - Maggie is from the present day, as in now, the 21st, century. When one day, she woke up not knowing what happened to her for one whole night, she doesn't know what to make of the until a year later, the same man she saw a year before came to get her, to save her, in fact. There, she ran away from these minions called Arachniman (I think..) who are trying to kill her.

Marcus - He is the one who went back to present day to save Maggie. Then, he took Maggie to the future, ( we don't know how far ) to work as a BCO member, like she originally was, and help save the world before it gets taken away by the bad guys.

A BCO member each have their own different role and different job. That's what I like about this book. Maggie is the Executioner  and Marcus is the Healer. Joan, Clay, Doc, and Karl all plays different roles. They make up a team, but this stop would be focusing on Clay. ;)

The Ending:
The ending actually left me wondering what would happen next and wanting for more. And I also begin to question who Maggie's brother really is.

Extra:
I'm doing a book report on this book....since the genre of my book report must be Science Fiction or Fantasy and this book was right in front of my face, so why not? Plus, I was too lazy to go the library. Our book report though, is to make a board game out of this book. (I'm dying over here...) So does anyone have any suggestions or ideas? (I hope asking for ideas isn't consider cheating) Thanks!

First, I'll introduce who Clay is in the book. Clay is the Concealer of the group and he hides the team from being spotted completely. He is the shy and quiet person in the team, but does a huge job in advancing the team forward on missions.


1. Can you fully explain what your job as a Concealer is?

Of course. I’m Clay and that’s my role in the prophecy. In our world, everything is done with the mind, with what we call neurochemical abilities. Many can sense other people’s minds or neurochemical abilities, and dangerous people will lash out at them to incapacitate the person. I use my abilities to Conceal the minds of others. Basically, I just wrap a shield around the mind of the person I’m Concealing. It masks or blocks their neurochemical signature so that anyone searching won’t be able to find them that way. It doesn’t hide them physically from another person’s eyes, but if they stay out of sight, no one will even know they’re around.

2. What was your first impression of Maggie?

I love Maggie! She’s kind and intelligent and funny. A bit rebellious perhaps, but I’ve always been okay with that. She fit right in with the team. Mostly, though, she’s very decent. She senses right and wrong always ends up on the right side of things.

I’m twenty-two, which makes me one of the younger ones on the team. I’m married, though, and my wife is expecting our first child.

4. How did you get into the Brain Chemistry Optimists?

Actually it’s kind of in my blood. My family has been a part of the BCO since its founding. My parents and grand-parents grew up in it, as did I. My wife was the same way. We grew up together and hope to raise our children in this same life style—to fight against oppression.

5. What do you do in your free time when you’re not Concealing the team?

Naturally I spend as much time with my wife as possible. My best friends are the team members, so even when we aren’t working we tend to spend a lot of time together. Maggie and I were always especially close. I also art. I whittle and carve. I’m working on toys for when my child is born.

6. Is there any special place at heart that you want to go or do go in Interchroniter?

I would love to see the world. Don’t get me wrong, I love my home at Interchroniter, but it can be confining. It’s too dangerous to travel with the collective goons roaming around. I dream of the day when my child can walk across a mountain range and breathe the free air without fear of being absorbed by the collective.

7. Do you have any feelings for anyone?

Just my wife and unborn baby. Like I said, the team is all very close. We’re like close-knit brothers and sisters.

8. If you could go back in time and do something over again, what would it be?

I don’t have any major regrets in my lifetime, but given what happens on the island (I won’t spoil it for you) I guess if given the chance I’d just go back and make sure that I told everyone who was important to me how I felt about them. Life can change so suddenly and then all the chances you thought you’d always have can be gone.

9. Can you explain what this world in the future is like?

It’s kind of a scary place to live. The collectives are trying to force every person on the planet into collective living. Those of us who champion individualism are few and far-between. We have to keep ourselves hidden in order to be safe. The collective’s henchmen—known as Arachnimen and Trepids—constantly roam about looking for people to harm, torture, even kill if they can’t force them into the collective.

Yet, it’s not terrible for all that. Those of us who live in places like Interchron are strong in our cause. We stick together, help one another, and try to find happiness in our daily
lives. We have hope and a lot of it. It makes one feel very alive.

10. Finally, what do you think about all the other team members?

As I’ve said, they’re my family. Maggie is the most important one on the team. I don’t envy her task, even though she isn’t entirely certain what it will be yet. Doc is the leader and everyone looks to him as such. Karl and Marcus are the rocks of the team, though Karl is much less stoic than Marcus is. And Joan is the mother of the group. She keeps us calm, on task, and makes us get along. We’re all such different personalities, but we work well together.

Thanks so much for interviewing me today on In This World of Books. I’ve enjoyed being here!

Yay! That's the end of the interview! I hope you guys had fun meeting and learning more about Clay! And I also want to thank Clay for answering my questions ;)