Welcome to my stop on the Rock Star Blog Tour
hosted by My Pathway to Books.
This tour consist of the first two books in the series:
Jaded and Faded by Mercy Amare.

**Faded is releasing on June 6, so the buy links for it will not be available until then!**

I'm Scarlett Ryan.Yes, THAT Scarlett Ryan.I live an extraordinary life: millionaire rock star, owner of exotic cars, pictures of me in every magazine, millions of fans, and a name that is recognized world wide. It's supposed to be my dream come true. But, my life IS a fantasy, and I want real. I want exciting. I want... NORMAL. So, I moved from California to Florida, hoping to obtain some normalcy. Instead I find...Stephan Montgomery.He's an arrogant jerk. Seriously, I hate him. I swear if he tells me one more blonde joke, I will punch him... again... Unfortunately I can't stop thinking about him, or his gorgeous green eyes. Trust me, I know that he's bad for me. If only my heart would listen.I also find out that my parents have kept a LIFE CHANGING secret from me. I need to know the truth.The harder I strive for normal, the stranger things seem to get.Jaded is book 1 of the Rock Star trilogy.

Cindy's Review:
Well, just from the series name, I'm pretty sure you can tell this series is about a rock star. And from the description, you can tell the narrator/main character is a tad bit obnoxious. Or not. Scarlett is actually a pretty cool main character. She's quite entertaining and funny.

So Scarlett had literally been a rock star since she was 15. Her parents, which she ends finding out that they are her step-parents and they are selfish as whores. Well, maybe not the whores part, but I don't want to say a bad word.  Scarlett has a house in Hope. She's 19 and she's not finish with her high school classes yet due to her tours that take up most of her school time.

When she goes to Hope, she meets a guy named Stephan Montgomery, who is more obnoxious than she is, considering that she's not really THAT obnoxious, like somebody over there with that name Stephan.  Stephan has a lot of family problems or family confusions. Scarlett actually kind of helps Stephan a lot. Oh. And yeah, he's also her next door neighbor. He has a step-brother named Ethan.

Alec is Scarlett's best friend. He is also a celebrity. Whose, omg, the MOST obnoxious of all. But he's like really sexy. It's a wonder why Scarlett doesn't fall for Alec. Oh. yeah. And I forgot to mention Scarlett is one year older than Stephan. Some people may have problems with the age and everything. I'm not one of those types. Actually, I don't really care. I think Stephan and Scarlett is cute together.

Everything was going perfect, until Scarlett starts to have her own family confusions. Like why her older sister, Stacy left her. And she also found herself an identical twin. Last time I read something like that was when I read My Sister, the Vampire. LOL.

Either way, this book really reminds me of Unmaking Hunter Kennedy by Anne Eliot. I really love that book. It kind of have a similar plot of rock stars just having some peace in a small town and ends up falling in love. But the main character is a guy.

A fun and entertaining read for those contemporary readers. I left Hope – the only place I’ve ever felt at home. So now what? Where do I go from here?When I left, I didn’t just leave my home. I left my friends, my sisters, and Stephan… I just found them. I can’t lose them now.I know that I want to do MY music. I need to remember WHY I wanted to play music in the first place. And the only way to get that is by firing my dad, but that may be harder than I thought. On top of everything, I now have cameras following me around everywhere. Even my own home isn’t safe anymore. I’ve come to realize that normal will never be an option for me.

Cindy's Review:
Okay, so  continue on the series.  I guess you can say Faded took place right after Jaded was finished. I find it amusing how all the titles in the Rock Star trilogy rhymes. ;D

So the romance thing. I really have no problem  with Scarlett and Stephan. I mean, really. They make a nice couple and all, but I really think Alec and Scarlett are entertaining. They are funny. And they actually know each other more. But I know this definitely wouldn't happen, since Scarlett is with Stephan and Alec is hinting a relationship with Bridgett, Scarlett's twin.

Alec is so funny though. I have to say, he's my favorite character in the whole series. Like really. He's one freakin' awesome guy~ Bridgett is so lucky. LOL.

Recommended for those who enjoy hot rock stars and young adult. Which is like, basically me. ;D 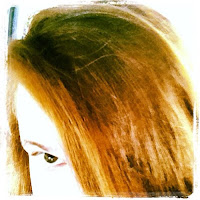 P.S. Hated is the 3rd book in the Rock Star series! ;D
More info can be found on Mercy Amare's website.