Welcome to my stop on the Pepped Up Blog Tour
hosted by YA Bound Book Tours.
Find the tour schedule HERE. 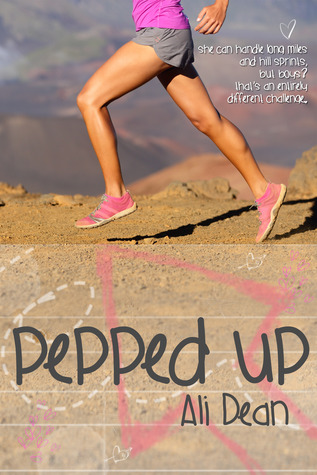 Blurb:
Pepper Jones is ready for an epic cross country season. She wants to qualify for Nationals, and she’s willing to do anything it takes to make it happen. She can handle long miles and hill sprints, but boys? That’s an entirely different challenge.

Pepper’s never considered revealing her deeper feelings for her longtime friend, Jace Wilder. After all, he’s got the personal magnetism and good looks to hook just about any girl in town -- and he has. Their friendship stands apart from high school social circles, and they’re both just fine with that (or at least they pretend to be).

That is, until running star Ryan Harding moves to town.

Cindy's Review:
At a Glance/ The Cover:
Pepped Up starts the series off with a love triangle, that thankfully gets solved by the end of the book, so it doesn't drive me crazy by dragging onto the sequel. But maybe those crazy cliffhangers make me want to read it more.

When the synopsis mentioned cross country, I was immediately hooked. Who doesn't like to read about something that's kind of close to home. Just the running part. Not the boys. :/ Sadly. Plus, there was this super cute "I'm in love with my best friend" romance and this hot cross country boy coming in.

The Characters/My Opinion:
Pepper Jones - Let's start off with the main character. The girl who had to choose. First off, I like her name. It's unique and it doesn't sound weird at all. Pepper Jones is basically an orphan that lives with her grandma, who appears to be this sweet, but wild old lady that seems super fun to be around with. She's lived down the street from her "best friend", Jace for a long time. They grew up together, so in a way, he's also known as "the boy next door" and "childhood playmate." Pepper has a crush on Jace, but she's never been able to tell him, but he obviously likes girls that are waaay out of her league. Or so she thinks.

Jace Wilder - I love the name Jace. Because it immediately makes me think of the Shadowhunters series and those are good feelings. Well, that's a good start. THIS JACE is a lovely guy, I suppose. I do find him somewhat controlling and obsessed as the story goes on, and that is never a healthy relationship. But Pepper doesn't seem to mind. We don't really see Jace's side of the story, but I guess he has been in love with Pepper for a while, but she's always been "untouchable" because he has "problems." Jeez. I mean, he's a high schooler, but it's probably more of the protective older brother thing coming in and telling him hands off.

Ryan Harding - Honestly, if Jace wasn't there, I would have totally rooted for Ryan. He's just overall perfect. But Pepper's crush on Jace is influencing me, since it's her POV and I'm hearing her thoughts on how perfect Jace is. Plus, guys that are out of reach just seems to be hotter.

Now onto the plot. I really liked the beginning. Like about right where Ryan just came into the story, but nothing serious had happened yet. I was hooked. The suspense. And what would happen. I couldn't put it down!

BUT THEN. She started dating Ryan. And still had major feelings for Jace, who was pushing her away. And she continued to date Ryan. And tried to convince herself to like him. NO. Just no. You are leading him on, girl. And I never approve of that. It's kind of obvious from the start who she ends up with. Always. So leading Ryan on. Ugh. How could you. So I must say, the book just died down. I expected a better ending, or just a better climax before the resolution, but there wasn't much build up.

***If you haven't already gotten who Pepper ends up with in Book 1 from my review, then be prepared to know just by reading the blurb in book 2*** 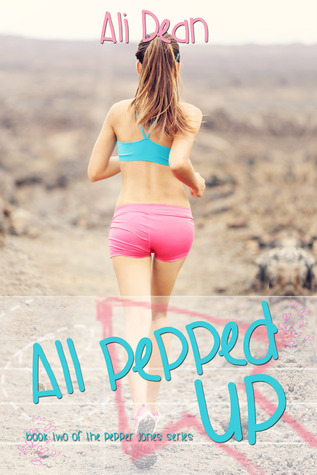 Blurb:
(This is the second book in the Pepper Jones series. The following description contains spoilers for Pepped Up, which should be read first.)

Pepper Jones knew that being Jace Wilder’s girlfriend wouldn’t be simple. But she didn’t predict just how many complications would arise from his past. Jealous girls? That she expected. Family secrets? Not so much. At least Pepper can always hit the trails to clear her head… except when it comes to racing. The high expectations from her phenomenal cross country season haunt her, and she can’t seem to get psyched up for track season. Pepper’s junior year at Brockton Public is full of challenges on and off the track, but she’s not afraid to face them.

Cindy's Review:
At a Glance/The Cover:
Love that cover. Can I get a runner body like that? Please? And also while I'm at it, can I just get a quarter of her swiftness. Cuz I really want to run those five minute miles. Cross country season is just around the corner, and I could really use some boost. :D haha.

The Characters/My Opinion:
Well, you already met the characters. There's a lot of jealousy things in this book. And more QUEEN B's that appeared in the last book, but wasn't as important. Jace is officially Pepper's but this brings back those dramatic high school problems like trashing lockers, hiding people's clothes, and all those immature things that I hope high schoolers don't really do.

I haven't really met a Queen B at our school yet. There are definitely rude people, but someone who rules the school and stops at nothing to humiliate you? Nope. None. Maybe I hang out with the wrong crowd. Lol.

I feel like the sequel is more like it's prolonging the ending and kind of just dragging on the story. If the actions done by the Queen Bs aren't that childish and annoying, and if they had more depth, I think it would make up a better story. Like I want the intensity to go up! Suspense! That's what would keep me going. You know what I mean?

Pepper did go through a character growth though, that enables her to be more confident about herself. I love that. And I'm glad someone like Jace supports that.

The Author:
Ali Dean lives in Colorado with her husband, twin babies, and golden retriever. In addition to reading and writing, she loves the outdoors- everything from marathon training and biking to snowboarding and skiing.