Welcome to my stop on the Holly Hearts Hollywood Blog Tour
hosted by YA Bound Book Tours. 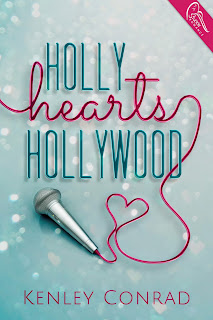 Synopsis: Seventeen-year-old Holly Hart wants to be a star. She moves to Los Angeles from the small town of Cedar Junction, only to hear she’s too fat and ugly to be a famous singer.

But when Shell Shocked Records looks past Holly’s plus-size and less-than-graceful-personality to offer her a recording contract, Holly cannot believe her good fortune. On closer inspection, however, the record execs want Holly to do all the singing, and a thinner and more beautiful girl, Lacey, would lip-sync and get all the credit. Holly goes for it because after all, she wanted to sing.

Contractually bound to secrecy, Holly is more than happy to sit backstage while Lacey shimmies in the limelight and basks in the fame. Before she knows it, Holly is friends with Serena, the pop-star daughter of a music-mogul, flirting with an intern, and developing a strange half-friendship with Lacey.

When Grayson Frost, the biggest country star in America, and coincidentally, a former school bully begins dating Lacey, Holly hopes that he won’t recognize or torment her.

Through a series of embarrassing and weird events, Holly gets to know Grayson and learns that he is much nicer and more mature than he was four years ago. Holly is horrified when she starts falling for him. When Grayson admits he fell for Lacey's voice, what is a girl to do when she can’t legally tell the truth at the moment when the truth matters the most?

Cindy's Review:
At a Glance/The Cover:
The whole thing sounds kind of cliche. But as I read the summary, I really wanted to know what happens. Does she get the guy or not? And this definitely seemed like a fun read I'll enjoy. :) So....I read it. Obviously.

The Characters/My Opinion:
Holly - Holly is not the idea of a perfect protagonist. She has an amazing voice, so no body shape, no image, no confidence. She's perfectly fine, behind stage, befriending celebrities. I think I'll be fine too. I mean, being friends with celebrities is enough for me! :)

Grayson - I don't really know what to think of him. He sounds like a jerk, but Holly didn't give him a chance in the beginning. Just when I thought he was getting better, I don't know if he's being legit or is he playing Holly. Especially with that somewhat cliffhanger ending, I really don't know what to think of him. I can't say I'm in love though. Not my idea of an ideal guy.

Lacey - The girl who's getting all the credit. She's a total ***** in the beginning. Not gonna lie. I don't cuss, but that's like the only word to describe her. Lacey expects Holly to be her pet or dog or something. But as Holly learns more about Lacey and get to see a different side of her, they become more friendly. Although Lacey is still a bit bipolar.....and then in comes Grayson. Holly have undeniable attraction to Grayson. But so does Lacey. Whose going to get him in the end?

Well, I don't know. Because I think this is a series. I'm not sure. It doesn't seem like the book ended at the end so....

Serena - Is that her name? Or is it Selena? I really don't remember even though I read this like 2 weeks ago. Blame my horrible memory. Actually, I'm using all my memory trying to remember 100 pages of Biology and like 80 pages of world history. School is taking up my life! Okay. Back on to Serena! She's super cool! I would love to meet a celeb like her and befriend her! Serena stands up for Holly and she's just super chill. Even if she wasn't a celeb, I would totally befriend her!

Okay. There's the other love interest - I absolutely cannot remember his name. Was it Nick? All I remember was the silver hair, tall, and glasses, and super cute. He sounds cute. Holly and this guy, Nick?, has a cute romance. Of course, until she finds herself falling for Grayson....again. Nick doesn't like Lacey or Grayson. And like Grayson, I really don't know what to think of Nick. In the beginning, I really liked him, although I knew he was just a side guy for Holly, because obviously, Grayson's the main character....but then towards the end, he somewhat became a jerk. Or was it Holly who made it seem like Nick became a jerk?

I don't really know. I'm kind of confused about the ending. So it's Nick vs Grayson. Whose the bad guy? We'll have to see.

Overall Thoughts:
Okay, I'm going to talk about the plot here, just because. The plot of a cutish chick litish type of book. I thought the romance and chemistry was really cheesy. I mean, a celebrity whom went to MY school. And I talked to him. Yeah? And I probably got his number...yeah. I WOULD FREAK OUT! But Holly just hated him. Yeah he bullied her. I don't really know how that works. Like I can't really imagine a bully become a celebrity. How is it even possible. When did his personality change? I think Holly would have noticed it.

Also, can you really fall for your bully? I mean, bullies aren't usually good looking, popular guys at school. Or maybe it's just the schools I go to. Because if they're good looking, they don't need to be bullies. They got all the girls and all the athleticness and teachers. Why waste time bullying lesser kids? Unless, it was flirting kind of bullying....I don't know.

It was a fun read. I can't say I'll put it on my list of summer reads, but I thoroughly enjoyed it and liked how the plot twisted and changed. I'm really interested in what's going to happen next (if there is a next).

If you like romance and cheesy romance, then try this one! Cheesy is not always a bad thing. The chemistry between the characters wasn't really cheesy, but the idea of falling for your bully? .....I can't describe it. HAHA. :)

I'm the author of the upcoming YA series Holly Hearts Hollywood, coming September 2014 by Swoon Romance. I'm a twenty-something cat lady who lives in Phoenix, Arizona. When I'm not working my office day job or writing books, you can find me either singing and dancing or binge-watching TV shows on Netflix.

Happy Reading~
~Posted by Unknown at 6:30 AM